The Space Review: "Permission to believe" in a Moore's Law for space launch?

The Space Review: "Permission to believe" in a Moore's Law for space launch?: Doctor Roy's frustration was as palpable as his ambition. "My wife says to me, 'I can now call India from the U.S. and hear a pin drop on the other end of the line,'" he told me. "And she asks, 'So what is it that's so hard about what you're trying do?'" His brow furrowed. "She doesn't understand-this isn't like electronics, computers, communications. There are no quantum leaps in combustion." His hands go up in the air, and the pitch of his voice goes up a notch. "We are still trying to figure out how to burn things." 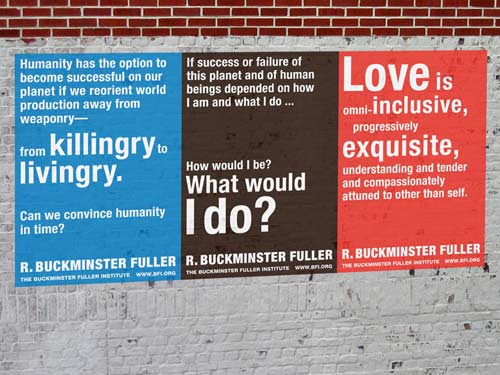 I recently met a really cool guy named David that is working on a labor of love called mediatrips. This guy believes in free culture so much that he gives away 200 bucks every month to those who "rip and remix events from television and film to create something new/original"; this money is out of his pocket and he's a regular joe so he's not rolling in money. The award is given to those who produce the best mediatrips. Lessig is an advisor to the group.

Self-expression can be a traumatic experience. Artists understand this better than most people. Many painters, writers, singers go through intense emotions just before they release their work to the public because self-expression exposes you ... and it doesnt matter if you are making a flippant remark at the office water cooler or writing the screenplay for the next Spiderman movie. Every word out of your mouth reveals more about your[self] than reality.

Stephen King has revealed a great deal about himself through his writing. He is a gifted writer whose stories have resonated with millions of people. He is the subject for the first competition. I have included a link to his profile at the Internet Movie Database. It is a good place to find films to sample/mash.

Subject: Stephen King
Submission Deadline: August 7, 2004
Prize: $200 (All prize money is donated to EFF. It is given on behalf of the Winner)
Sponsor: David Goldschmidt

Life on Mars: One Step Closer

Holy shit, they've now discovered ammonia in the atmosphere of Mars. Some researchers in Europe recently found traces of methane in the atmosphere as well. The important thing about these two elements are that they are very short-lived, and don't stay in the atmosphere unless something regenerates them. Two things are known to regenerate these two elements: volcanism (i.e. a hot planet with geologic activity) or life. Mars isn't known to have either of these; is is currently considered to be a 'dead' planet with no active geologic volcanism. Even if the elements aren't from life, but from volcanism, then this means that the crust of the planet itself might be hot enough for life, and it is hypothesized that entire ecosystems might exist within the crust of planets. 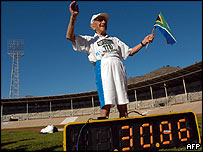 I just found out that a third-cousin of mine, 100 year old Philip Rabinowitz, is now the world's fastest centenarian:

Philip Rabinowitz from Cape Town ran 100m at the city's Green Point stadium in 30.86 seconds, beating the existing record by more than five seconds....."Every time I go, I break my own record. I get younger and younger," he said as his pulse was checked by his coach.

Besides eating apples, he recommends moderation, work and walking as the key to a long life...Work, Mr Rabinowitz explained, was another secret to longevity and he goes to his daughter's dog food factory five days a week to do the accounts.

Can you see the family resemblance? 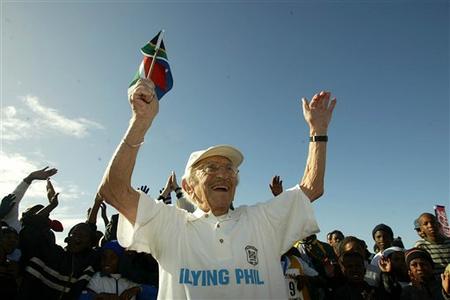 I hope I'm as healthy when I'm his age! I didn't even know about this guy till this week, when my mom told me.

Vivaldi: A P2P Coordinate Algorithm That Takes Latency Into Account

Practical, Distributed Network Coordinates: Vivaldi is a distributed algorithm that assigns
synthetic coordinates to Internet hosts, so that the Euclidean distance
between two hosts’ coordinates predicts the network latency
between them. Each node in Vivaldi computes its coordinates by simulating
its position in a network of physical springs. Vivaldi is both
distributed and efficient: no fixed infrastructure need be deployed
and a new host can compute useful coordinates after collecting latency
information from only a few other hosts. Vivaldi can rely on
piggy-backing latency information on application traffic instead of
generating extra traffic by sending its own probe packets.

My brother Ryan came into town from Austin last weekend; we threw a great pinata party for him in Dolores Park: 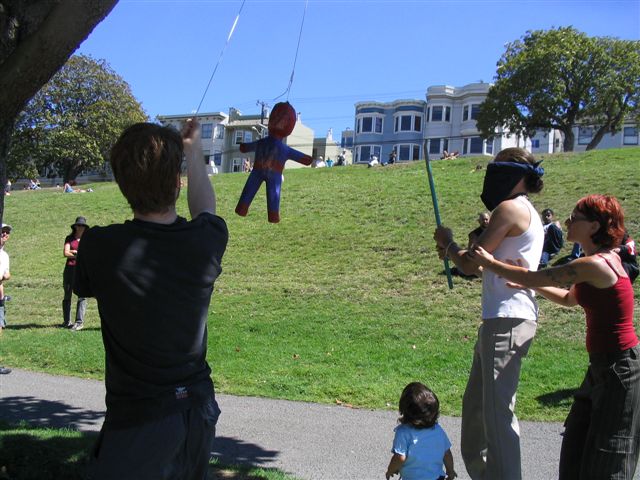 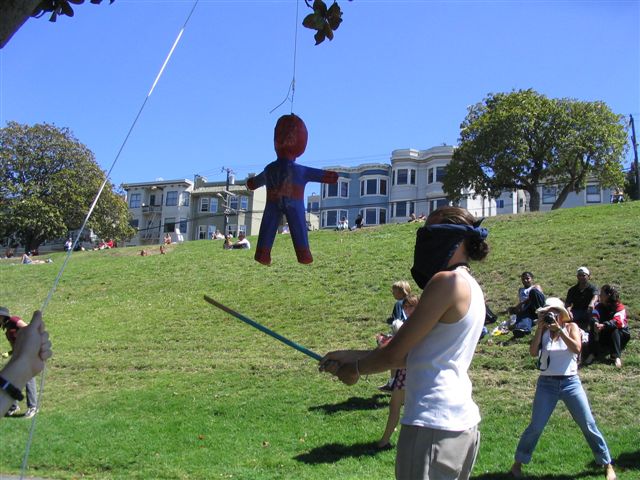