What is WAML? WAML's goal is to strengthen existing web standards, such as HTML, JavaScript, CSS, etc. in order to build better Web Applications. By Web Applications WAML means:

The scope of this specification is not to describe an entire operating system. In particular, office productivity applications, image manipulation, and other applications that users would be expected to use with high-end workstations on a daily basis are out of scope. This specification is targetted specifically at applications that would be expected to be used by users on an occasional basis, or regularly but from disparate locations. For instance online purchasing systems, searching systems, games (especially multiplayer online games), public telephone books or address books, communications software (E-mail clients, instant messaging clients, discussion software), etc.

WAML is being created through something called the WHATWG group, which is outside the IETF and W3C and is very open to community input. It is a very grassroots process that to me looks like how Atom was created (Ian: what about creating a WAML Wiki and driving development through there, or at least putting copies of the draft specs onto Wiki pages so people can mod them up?)

Whats new in this draft? Ian Hixie says he "just finished writing up the initial proposal for how to do menus in Web Apps. It's still very rough around the edges, but the three examples in the tutorial section should be interesting." Get involved with the WHATWG working group and WAML by sending an email with comments after reading the spec, joining the WHATWG listserve which is humming with activity (lots of community input is going into this spec), or visiting the web site.

By way of my mediatripping friend David Goldschmidt comes news of a fascinating party this Thursday night in San Francisco. The party is called Fun with Videophones and is from a group known as Multiverse:

A live, interactive reality spectacle using (or mis-using) the marvels of video phone technology...our two contestants hop from bar to bar trying to score...the imagery is sent back to the gallery via videophones and you, the audience, decides what happens next!

Unfortunately I'm busy Thursday night, but if anyone goes tell me how it was and post back here.

If I had RSS events I could include all the details inside this post so your automatic RSS event aggregator could give you the option to add this to your datebook; perhaps next to each post that has RSS event info it would say "Add to Datebook" or something. What if I could also include mapping information inside the post as well (MML - Mapquest Markup Language)? 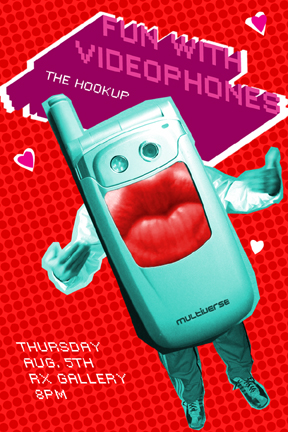