AJAX: How To Position Things on Screen

Browsers "supposedly" provide some nifty properties for determining the position of an element on the screen. For example, if you had a div named myDiv, you could type myDiv.offsetLeft or myDiv.clientLeft to understand where this div is in relation to other parts of the screen.

There are two issues though. The first is that it is sometimes difficult to find out exactly what these properties refer to on the screen, and the second is that most browsers differ by a few pixels on the values of these properties, which can be maddening.

On the first front, I recently ran across an amazing diagram from a Japanese blog named 51Windows; the post is in Japanese, but their diagram is pure gold and unbelievably useful:

This diagram shows exactly what each property refers to; great work.

[Update]: Chris Hobbs sent me an email that the diagram I pointed to actually originates from a Microsoft developer site.

Thanks to Dave's pointer, we had a great turnout to last Tuesdays coworking open house on September 6th.

Here is the roll call of who dropped by the space and tried it out this Tuesday:
Why don't you join us this Monday at coworking? We meet every Monday and Tuesday, from 9 AM to 5:45 PM.

Most people who work for themselves hack out of a
coffee shop or their homes. At first this is great,
but after awhile it gets old. You miss working around
smart people, and start slipping into bad habits, like
hacking all night and sleeping through the day.

I have created coworking as a solution to this
problem, an alternative office space where
self-employed developers and writers come together for
community and structure. The San Francisco Coworking
group meets Mondays and Tuesdays at a great space in
Noe Valley. I rent this space two days a week from a
women's art and healing space named Spiral Muse; as you can imagine, the
office is beautiful, with a garden in the back,
couches everywhere, a full kitchen, and paintings and tasteful
decor. Plus, there's WiFi.

We meet from 9 AM to 5:45 PM, and begin the day with a
short check-in. Then, we work in the amazing Spiral
Muse house, sitting at tables or relaxing on couches
as we do our work. Even though each of us is doing
separate work, perhaps programming or writing a novel,
everyone is working in the same space and can run ideas by others
or take breaks together at the "watercooler." You can
get lunch with others or alone. Later in the day we
have a 45 minute break where we do a different
activity every day, such as guided yoga, a walk to
Delores park, or how to mix a great martini; anyone in
the group can lead an activity. We end the day at
5:45 PM sharp, supporting each other in both starting
a good work day at 9 AM and ending our work in a
healthy, balanced way at the end of the day.

Room is limited to only four more people, so act soon.

Feel free to try out coworking for a free two weeks;
we ask that you make a small ten dollar suggested
donation. Afterwards, the space, activities, and
wireless is only $150 per month.

Please RSVP whether you will be joining us this
comming Monday, September 12th, at bkn3@columbia.edu.

Alt.Space News: America's Space Prize, Transhabs In Orbit, and the Chinese Weeks Away From Space Again

Ten Primary Rules of the Competition
1. The Spacecraft must reach a minimum altitude of 400 km (approx. 250 miles);

2. The Spacecraft must reach a minimum velocity sufficient to complete two (2) full orbits at altitude before returning safely to Earth;

3. The Spacecraft must carry no less than a crew of five (5) people;

4. The Spacecraft must dock or demonstrate its ability to dock with a Bigelow Aerospace inflatable space habitat and be capable of remaining on station for at least six (6) months;

5. The Spacecraft must perform two (2) consecutive, safe and successful orbital missions within a period of sixty (60) calendar days, subject to Government regulations;

6. No more than twenty percent (20%) of the Spacecraft may be composed of expendable hardware (the term 'Spacecraft' encompasses the launch vehicle in its entirety, including but not limited to, any and all fuel tanks, external rockets, carrier craft, and boosters);

7. The contestant must be domiciled in the United States of America;

8. The Contestant must have its principal place of business in the United States of America;

10. The Spacecraft must complete two (2) missions safely and successfully, with all five (5) crew members aboard for the second qualifying flight before the competition's deadline of January 10, 2010.


Second, Bigelow has announced they will soon be putting test versions of their extremely innovative transhab modules in orbit, moving them beyond just being Power Point diagrams. See a great article on Space.com about the test launch, including more details on the fifty million America's Space Prize. 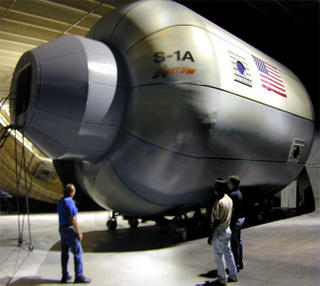 In other space news, the Chinese are just weeks away from their second manned launch. Taikonauts will soon be in obit....