Confused and Wanderin' in San Francisco

So this weekend was a tough one for me; I was in a funk for much of it. I'm finding the hours and pace at work difficult, trying to find balance in an industry that might not allow it. Can I do good work in the world and also take care of myself at the same time?

Anyway, today I did what I usually do when I'm confused and don't know what else to do; I pull a Forest Gump and just start walking. I started by going down a wildly steep alley that is near my home: 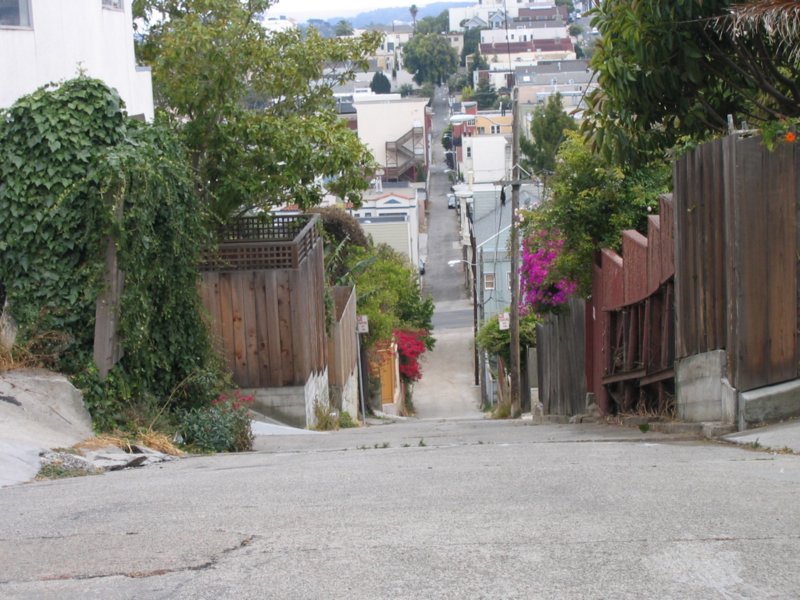 Here's the alley again, but with some pretty flowers in front: 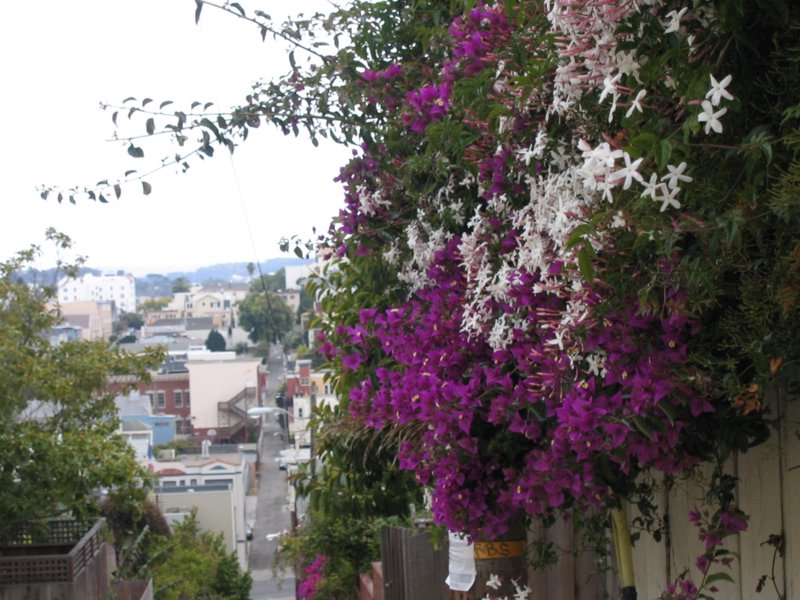 Walking down this alley I found some pretty random stuff, lots of street art. First, I found an impromptu piece of art posted on a fence where no one goes that seems to be making a statement either for or against the RIAA! 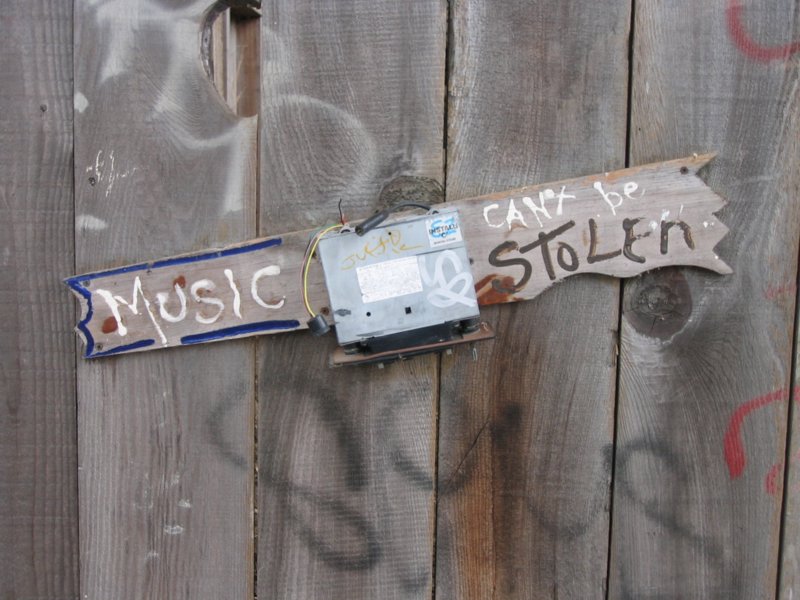 As I walked down the alley, and later on down near Dolores Park, I kept finding old bike locks, where the bike had been stolen, covered with yarn art: 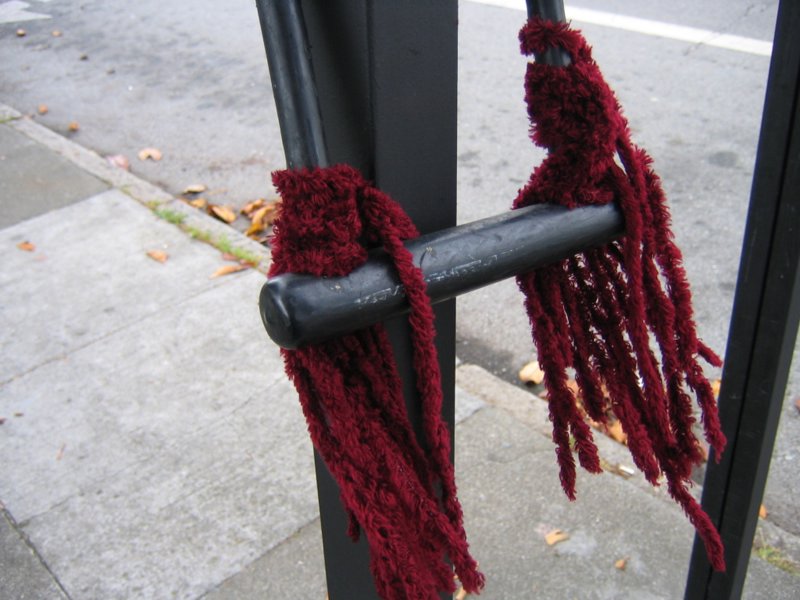 I saw at least three of these all over the area until I realized what was going on; someone had decided to turn all those ugly bike locks that were all that remained after a bike was stolen into works of art! They went and knitted strange yarn art onto all of them. I love that shit; totally anonymous street art in San Francisco, that most people don't even realize unless they start looking around. While your walking down the street in San Francisco keep your eyes open to just how much of this stuff is actually out there; it'll surprise you.

Next, while sitting at Dolores Park Cafe, sitting and staring out into space with nothing to do I bumped into a childhood friend of mine, Chuck Gonzalez. Chuck is the brother of Matt Gonzalez, who ran for Mayor of San Francisco recently as a Green candidate and got this close to winning. Chuck told me about an art opening that was happening at Matt's house in the area in about an hour, so I decided to continue my synchronistic wandering and head over there too.

Matt's house is amazing, a kaleidoscope of awesome art covering every square inch of the house. It's the Haight's version of the Museum of Modern Art. I called my buddy Michael and gave him the address, but didn't tell him what it was. He showed up with Carolina and they thought it was great (by the way, Carolina, I need my SF MOMA card back): 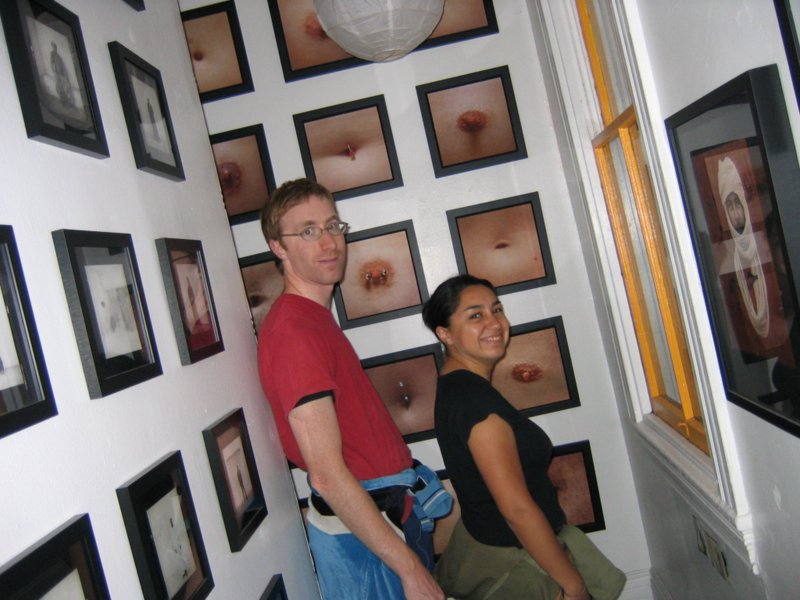 So I didn't necessarily gain any profound insights on my little wandering today but I sure stumbled across some interesting art, and that ain't so bad. 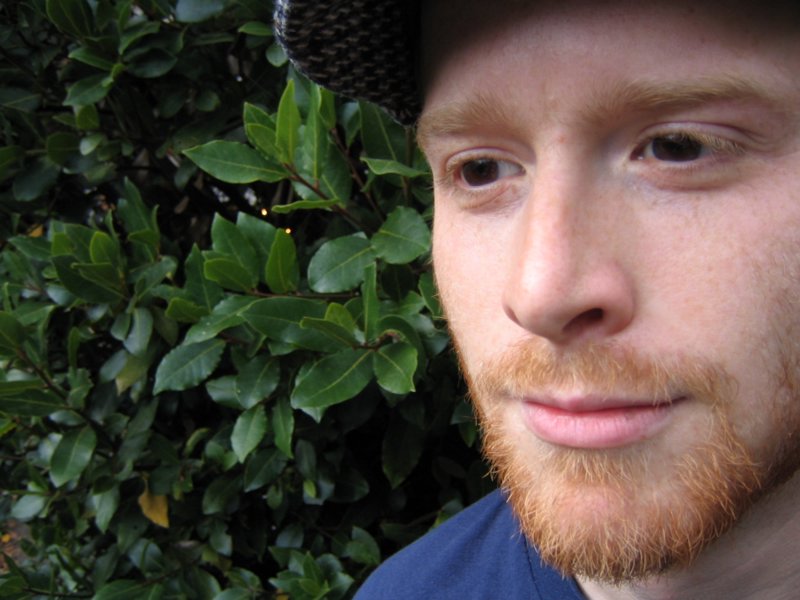 I Found the Creative Commons License on an SF Street Mural!

Today, while walking down the street, I saw a new mural by Mona Caron that has popped up on Church street near Market. It's an amazing mural; it is divided into strips, with each strip showing a different decade here in San Francisco. The final strip shows a possible future for the city. The mural is large, so I couldn't take a single photo of it; here are three photos that show different portions: 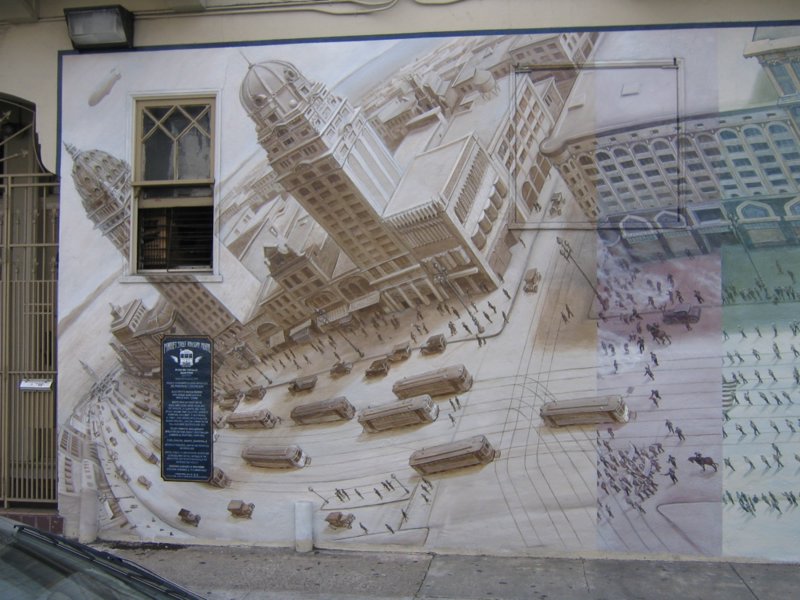 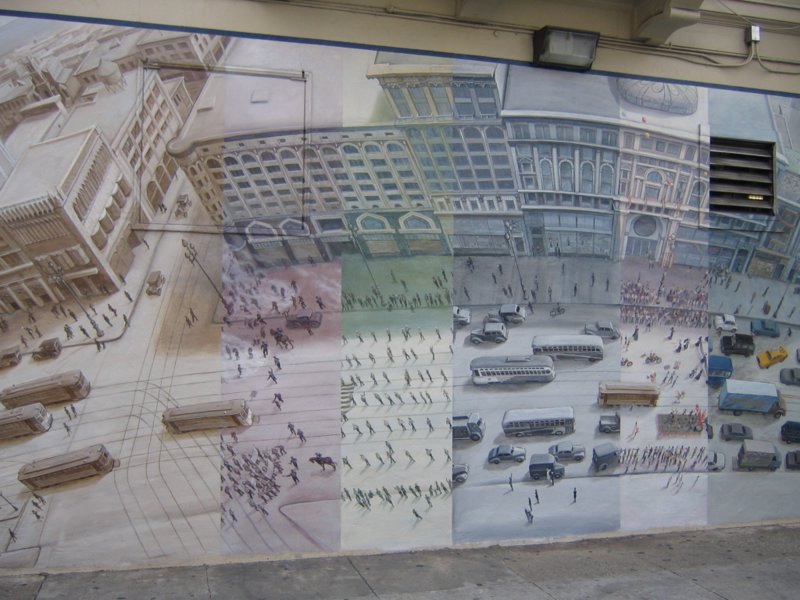 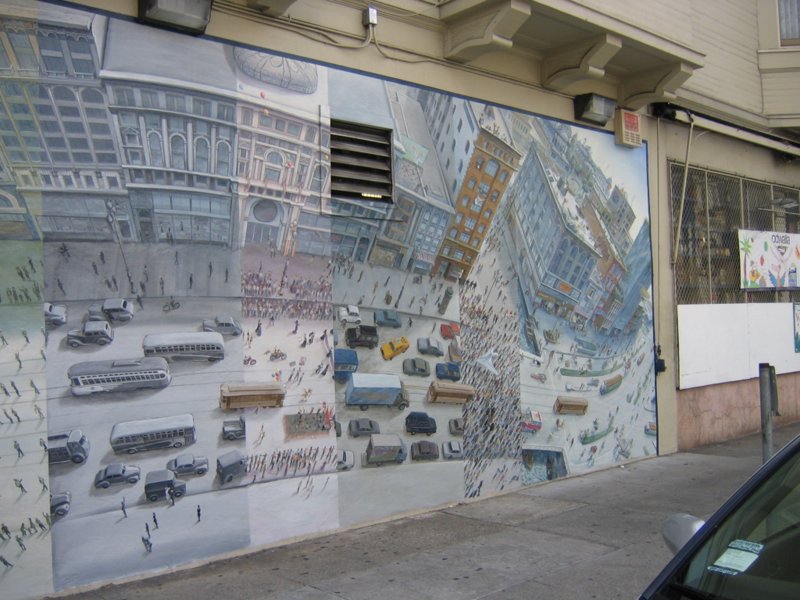 And here's the craziest part; in the credits portion is a full Creative Commons license: 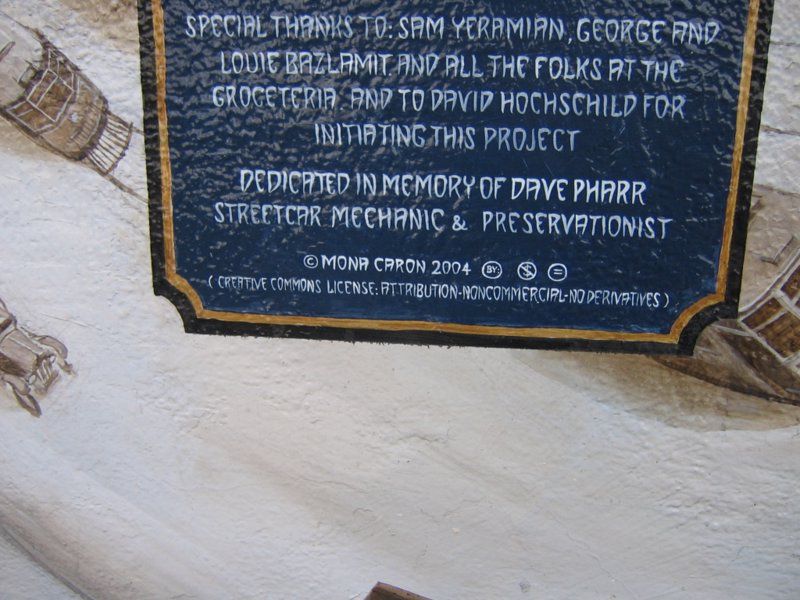 At the bottom you will see that it is under an Attribution-NonCommercial-No Derivatives license.

Some other cool closeups on the mural; the mural is filled with lots of tongue in cheek political and anti-corporate symbols. First is a shot of Reverend Billy and the Church of Stop Shopping, hanging out with his anti-buddy Mickey Mouse: 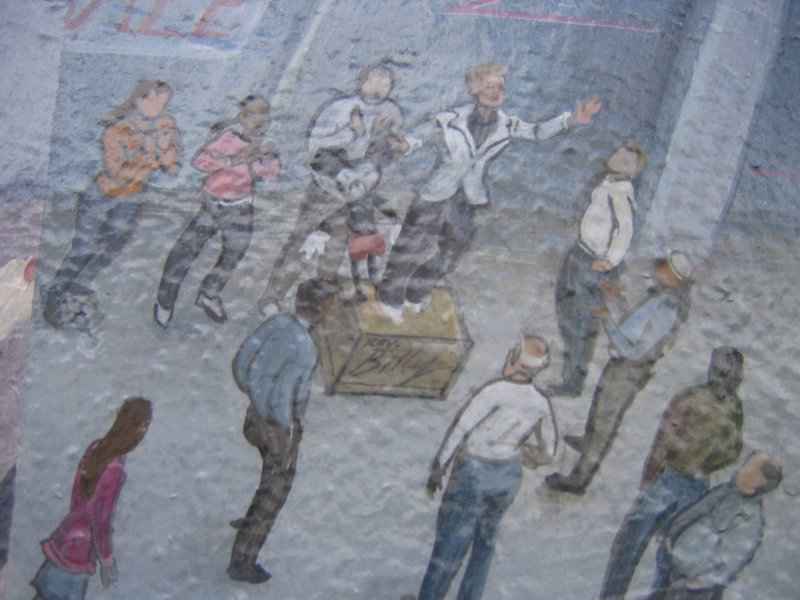 Another cool little part is a reference to our buddy Frank Chu and his 12 Galaxies conspiracy; Frank Chu is a San Francisco standard, a crazy guy who walks around with a sign that says 12 Galaxies at every imaginable political and public gathering: 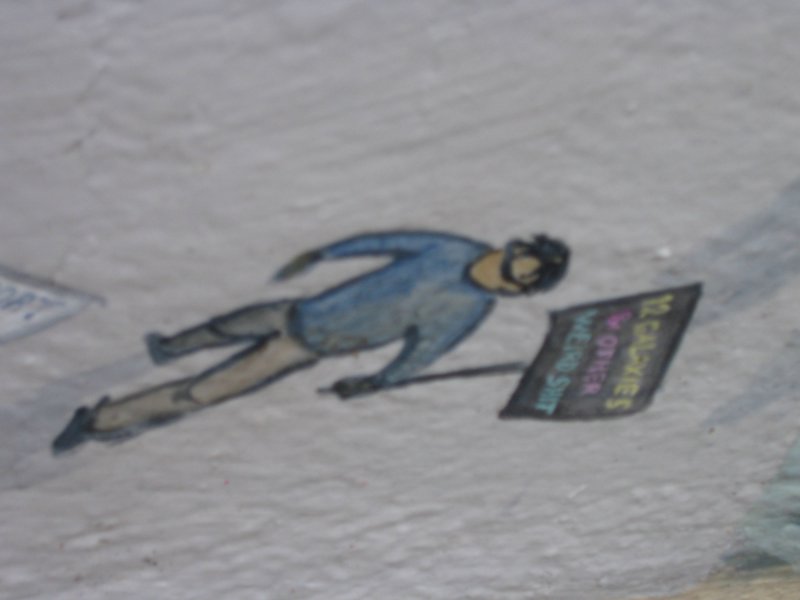 My favorite part of the mural is the final strip showing a possible future for San Francisco. It shows rooftop food gardens, with rooftop bridges connecting the buildings: 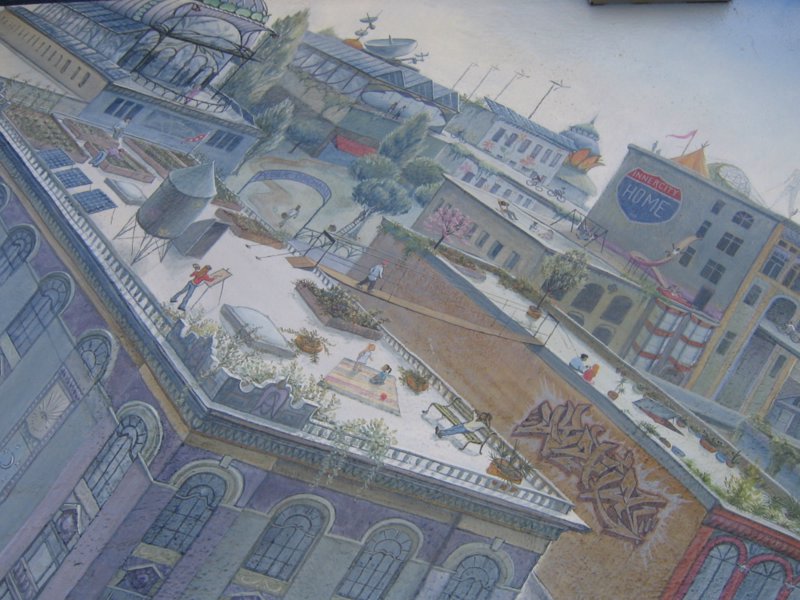 Next is a cool street scene, showing the "San Francisco Swap Center" and a huge Cell Space, but Cell Space #13. If you look closely you'll also see a cafe that serves not only coffee but humanities as well, including poetry and philosophy: 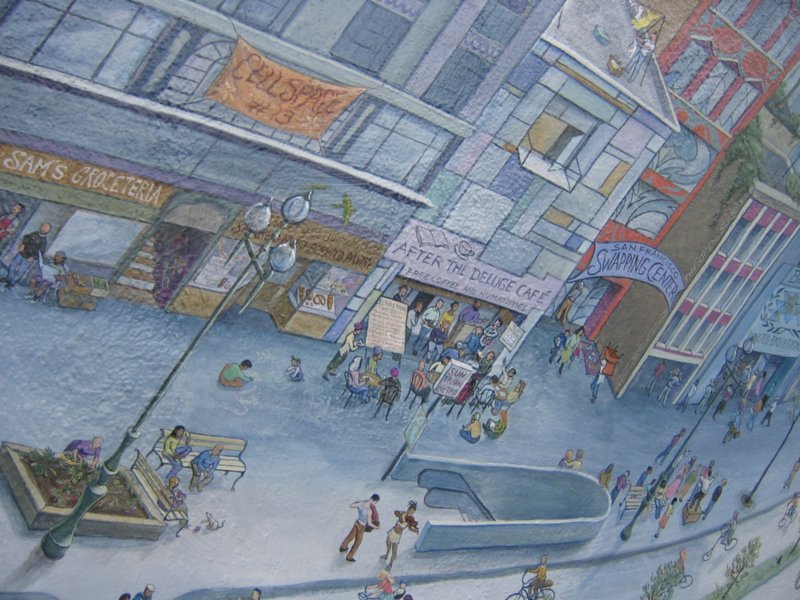 There's all sorts of bikes and strange cars that have solar power refuelling stations: 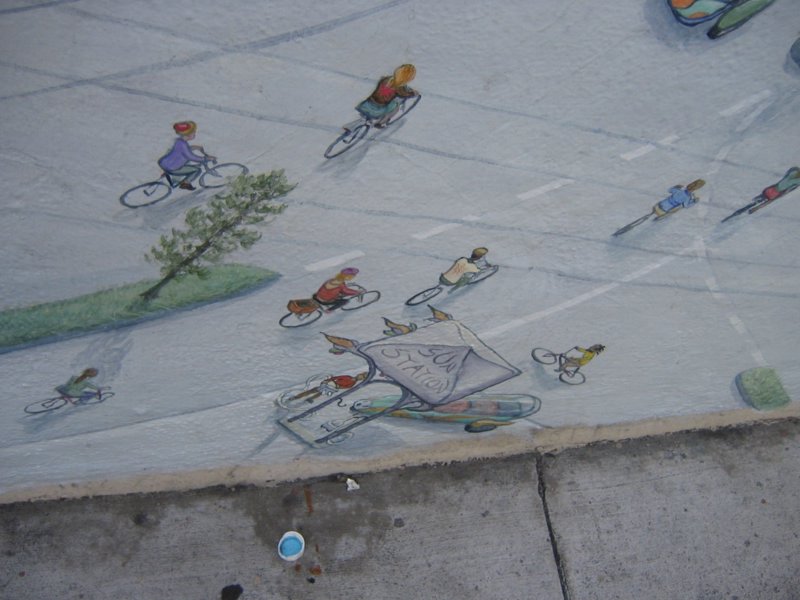 Including a firetruck that runs on biodiesel! 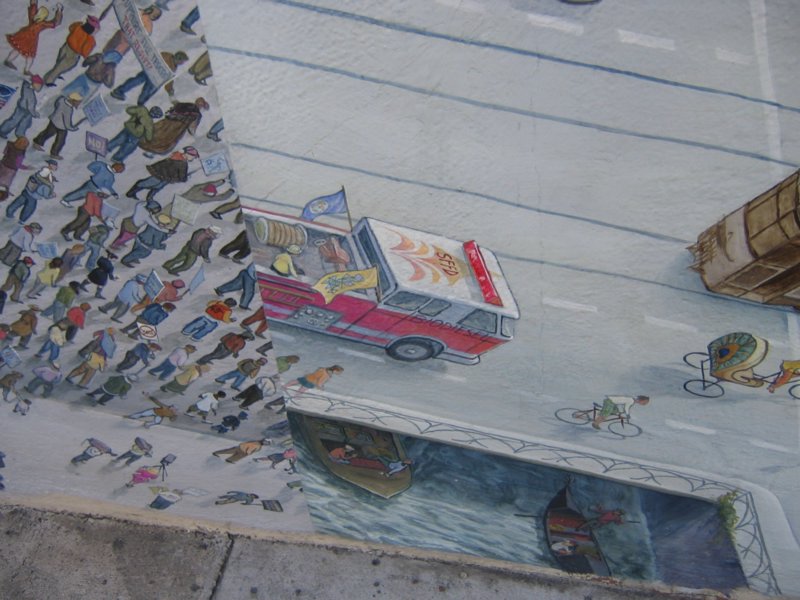 Thanks Mona Caron for making such a cool mural (thats the Attribution part of the license)!

Update: Joi Ito found an area on Mona Caron's site where she describes her Market Street Mural in more detail.

Update #3: A 12"x 36" poster of this mural is now available for $15 at the 300 Church St. Groceteria [Mapquest it], next to the mural. Support Mona and cool community murals by going and buying a poster!

Man, this is cool. This weekend I was just playing around with what it would look like to remotely generate XUL from JSP applications for integration into Mozilla, just to see what that application model looks like. One issue is that the security model in Mozilla gets kinda complex in that scenario, but I finally found a way to allow remote XUL apps to access the full Mozilla XPCOM system. First, you need to edit your prefs.js file that is in your profile directory (this is in different places on different operating systems; on my Windows box it is in C:\Documents and Settings\bradneuberg\Application Data\Mozilla\Firefox\Profiles\default.9m8\). Add the following lines to the bottom of this file _while Firefox is not running_:

The 'fullaccess' part is the name of your application; change it to the name of your app; also change the "http://localhost:8080" to the location of where your app will remotely generate XUL. This will be the URL that will be given XPCOM privileges.

Now, in your remote XUL, whenever you want to call a trusted XPCOM method or part of the Mozilla Application Object Model that is protected add the following line _in each JavaScript function_ that you want to be privileged:

What this does is give _just that JavaScript function_ the privilege asked for, so remember to put it into each function.

The first time a user runs your remote XUL app that has this line they will be prompted on whether to give your app permision to have full access.

One issue is how do you get those lines I gave above into the user's pref.js without having to manually add them. One way would be to create a small XPI download that adds them dynamically, but that is not really a satisfactory way to do things. Anyone have any ideas?