Wow, what a crazy week. May you live in interesting times, as Confucius didn't say.

I started working at the Internet Archive this week on a month long consulting project. We are building a very exciting, AJAX project that unfortunately I can't blog about until it's done. It's so cool to be working with one of my heros, Brewster Kahle.

While working yesterday, Freeman Dyson and his son George Dyson wandered into the offices; Freeman is another one of my heros, a brilliant, bohemian scientist in the vein of Buckminster Fuller. These are people who combine science and creativity to imagine new ways of living in the world; that's what I want to be when I grow up ;)

In 2000 I was living in Manhattan and working at a financial software consulting company named Random Walk. Random Walk was a cool bunch of people, but I didn't want my life to be about making rich people richer. I was frustrated with the state of the web, and felt that it needed to take a quantum step forward, hence the name Web 2.0. My old friend Christopher Tse and I use to throw that term around to imagine what a new paradigm shift on the web would look like, a useful container to force us to imagine new possibilities.

Web 2.0 Consulting was focused on using newer technologies that I felt would force technical and social changes on the web, including Flash, DHTML, XUL, and Wikis. If I find the old business card I can scan it in; it used to have all of these technologies listed on the right-hand side of the card with some pithy, Web 2.0-inspired phrase I can't remember anymore.

To be honest, I wasn't terribly successful with Web 2.0 Consulting in New York. I didn't have the networking skills yet, and wasn't confident in myself. I eventually ended up leaving New York in 2001 and travelling out to South East Asia, where I could live and work (cheaply) on a research and development project that initially started with the name Web 2.0, later renamed to Paper Airplane. This was because in my paper mockups of the UI, when I put it in front of people, they had no idea what Web 2.0 signified.

I've come a long way, though, and Web 2.0 Consulting is back to life. This month our client is Brewster Kahle and the Internet Archive, while November and December is all about helping Rojo, the web based, next-generation blog aggregator I worked for full time last year.

If you have AJAX and Web 2.0 oriented projects you want done well contact me, especially if you want access to cutting edge research and development on making AJAX applications more powerful than ever. I've been thinking deeply about wikis, grassroots-based web collaboration, blogging, DHTML, and next-generation browsers for a very long time, way before they were the popular thing. If your project needs breakthrough ideas and development feel free to contact me.

Special thanks to Kevin Burton, of Rojo and TailRank, and Christopher Allen, creator of SynchroEdit and some extremely cool web based MUDs, for helping me get the Internet Archive deal.

Getting the Internet Archive job has pushed back my release schedule for the AJAX based permanent storage system I built, which now has a proper name: AJAX Massive Storage System (AMASS). I almost named it AJAX Storage System until I noticed this acronym comes out to, um, ASS.

ASS, I mean AMASS, is basicly finished, but there is a bunch of QA work I need to do; special thanks to Jesse Andrews who has been helping with some of that. I need to do Flash detection, Flash installation, and so on if its not there, and there is a bug keeping it from working on Firefox on the Mac currently. It's raw, but feel free to download it and play with it, and if you have some time maybe you can even do some QA and add those features! :)

Here's Kirsten, one of my coworkers here at the Internet Archive; she joined the same day as me, so we are both newbies here: 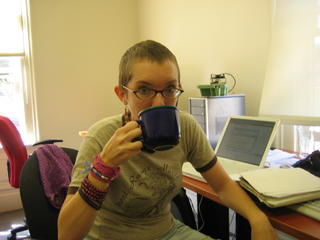 // posted by Brad GNUberg @ Thursday, October 06, 2005
Comments:
Is there any documentation on the API available somewhere? Or will it be made available only when the final AMASS version is released?

Mandy, that was one of the things I needed to do this week that got pushed aside. There is a testing file in there that can be used as a reference for now.