Douglas Engelbart has a great idea I love called bootstrapping. The best definition of it I've ever heard came from Dave Winer in 2000 when he was trying to bootstrap better web-based editing tools using XML-RPC:

Original Program Announcement for Mother of All Demos

Eileen Clegg and Bill Daul shared this with me recently: its the flyer from Douglas Engelbart's original 1968 "Mother of All Demos": 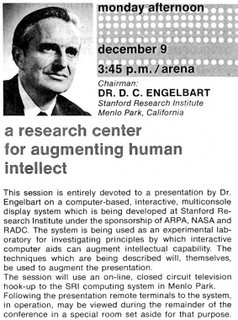 This session is entirely devoted to a presentation by Dr. Engelbart on a computer-based, interactive, multiconsole display system which is being developed at Stanford Research Institute under the sponsorship of ARPA, NASA and RADC. The system is being used as an experimental laboratory for investigating principles by which interactive computer aids can augment intellectual capability. The techniques which are being described will, themselves, be used to augment the presentation.

The session will use an on-line, closed circuit television hook-up to the SRI computing system in Menlo Park. Following the presentation remote terminals to the system, in operation, may be viewed during the remainder of the conference in a special room set aside for that purpose.