My girlfriend made this through JibJab; since this is my blog and I can post annoying (but funny) things, I'm imposing this on the world :)

Those are our 2 cats (George and Bianca), and the gray one is a feral cat we feed who hangs around outside (Grayboy). The guy smoking the cigarette is me, and my girlfriend Bekka is the other person.

(If you are reading this in an RSS feed click here to watch it -- it's funny, you'll like, trust me)

"Using the 1992 presidential election as his springboard, documentary filmmaker Brian Springer captures the behind-the-scenes maneuverings ... all of politicians and newscasters in the early 1990s. Pat Robertson banters about "homos," Al Gore learns how to avoid abortion questions, George Bush talks to Larry King about halcyon -- all presuming they're off camera. Composed of 100% unauthorized satellite footage, Spin is a surreal expose of media-constructed reality."

Ryanne and Jay have put up a great video going over the coworking movement; there are interviews with Chris Messina, Tara Hunt, and I: Many people strive for the freedom that working for themselves and freelancing brings. You can work odd hours in your pajamas at home, travel to exotic locals but still be on the job, not have to clock in at an office. After the initial exhilaration of being independent cools a bit, there is something missing- co-workers and the social environment that working for a company can bring. Enter Co-Working. Co-Working is an idea that independent workers still want and need social interaction and structure during working hours. Going stir crazy working in your living room? Can’t stand that Madonna remix album they keep repeating at the cafe? Want to bounce your ideas off some other geeks? Co-Working!

We started our Co-Working experience at The Hat Factory here in San Francisco. The most unexpected benefit, besides meeting great people, was the ability to separate work time from relax time- not an easy task for a freelancer. Our day schedule looked like this: Get up, go to Hat Factory, work for 6-8 hours, come home, put the computer to sleep, cook dinner, watch a movie. Hey, we didn't end up working for 12 hours today! We have a sustainable, not-burnt out life outside our work! Thanks Co-Working!

Thanks to Brad Neuberg and Chris Messina and Tara Hunt, from Citizen Space, for sitting down with us and explaining how Co-Working got started and what it all means. Get involved in starting your own Co-Working space by connecting to the folks already doing it! Check out the Co-Working Wiki, Blog and E-mail list.

My buddies Jay Dedman and Ryanne Hodson, video bloggers extraordinaire, did a video interview of me about Dojo Offline:

A few months ago Yahoo asked me to give the keynote at their internal Front-End Engineering Summit conference. This was a collection of all their front-end engineers from different sites, such as Flickr, the new Ajaxy Yahoo Mail, and more.

Yahoo asked that I come in and talk about the next 5 years of the web. Prediction is hard, especially 5 years in the computer industry, so instead I talked about inventing the future rather than predicting it.

This was a really deep speech for me; I struggled with it for 2 weeks, unable to work on anything else; it was a difficult creative process. Here's a 'markety' synopsis of the speech:

Brad Neuberg was asked to give the keynote at the Yahoo 2007 Internal Engineering Summit on the next five years of the web. Instead of talking about the future of the web, he came in and gave a heartfelt speech on invention, inventing the future, and knowing what you stand for. This speech challenges Yahoo to change, goes into the core of invention, and provides techniques for shaking the world up with powerful, new ideas. Become a better software engineer by being an inventive leader.

Much thanks to Eric Miraglia of the YUI team for setting the keynote up, helping with feedback, manning the cameras, and helping to mix the digital video. It was a great experience getting to know him; he's a super classy guy. 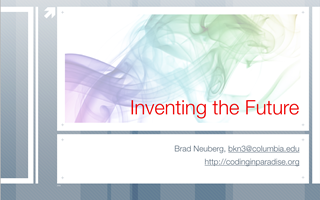