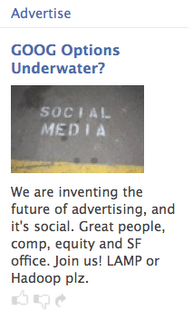 Another Googler told me they saw something similar on their Facebook page.

Nice; Ryan Barrett created an OpenID provider already in the Google App Engine. This means you can use this to sign into OpenID enabled sites, while using Google App Engine to scale the provider. See the details here.

I've been here at Google for about 2 1/2 months now and am getting used to the culture. I just ran across a great article in Fast Company that goes into some of the cool ambitious energy around here to change the world:

Now that I've joined Google as a Developer Advocate for Google Gears, blogging is one of my jobs on the Google Gears and Google Code blogs. I'm realizing how different it is to blog on this blog versus the Google ones. Its also causing me to gain much more respect for Robert Scoble. Robert Scoble was an evangelist at Microsoft, a role not unlike the Developer Advocate one I have at Google. I'm now realizing what a tremendous amount of personal integrity and bravery he must have had to blog about many of the things he did, as a change agent at Microsoft. Its a different view blogging from the inside versus blogging from the outside. I know Robert might have been controversial sometimes, but he always put his neck out with honesty and integrity. A tip of the hit to a fellow blogger and evangelist.

Advocating for the Web and Developers

I'm really passionate about the web and developers; I believe the web is one of the greatest gifts of our time, an amazing open system akin to the Library of Alexandria dropped into our laps. Much of my career has been about either extending the current web to have new functionality, such as Dojo Storage, RSH, and Dojo Offline, or imagining new kinds of browsers and new iterations of the web, such as Paper Airplane and HyperScope.

This coming Monday (December 3rd) I'm honored to be joining Google as a Developer Advocate. My job will be to evangelize the range of open source tools and APIs Google has released, such as Google Gears, GData, Android, and more. Google and the Web are in a virtuous cycle -- Google's DNA is built on an open web. When the Web does well, Google does well. Even better, Google is an open source, geek institution, where engineers are respected and run the place.

When I interviewed with the Developer Advocate team I found that all of them were passionate about evolving the web, keeping it an open resource for the world. Google has developed an amazing stable of open source tools that haven't had as much exposure as they should.

For example, have you checked out GData? It's basically smart syndication, what we used to call the lower-case semantic web at Rojo, where you have intelligent, semantic web services without the cruft and complexity of RDF -- you can access many of Google's sites as syndication feeds, delivered in Atom, and can update them using the Atom Publishing Protocol. GData is basically Atom + Atom Publishing Protocol, both open standards. There are GData feeds for Google Docs, YouTube, Calendar, and more -- nothing is stopping others from creating GData feeds as well, such as using GData behind the firewall for Enterprise 2.0 type niftiness.

Another cool tool is Google Gears, which is the team I will be working with initially. Google Gears is a browser plugin that helps to evolve the web in-place -- users can download a small plugin that augments the web browser with new functionality. The initial functionality is offline web applications, similar to the Dojo Offline work I did with SitePen. Google Gears is fully open source, under a BSD license. Do you have an idea on how to evolve the web, perhaps with cross-site XHR or cross-site package caching? You can create a Gears module and take part in the open source community.

I'm really excited about Google Gears ability to help sidestep the 5-year diffusion process it normally takes to get new functionality out to the web. Rather than waiting upwards of 5 to 7 years for a client-side relational database to appear in all the web browsers, for example, Gears simply bundled SQLite into itself, exposed it with a JavaScript API, and baked it into the Gears plugin. I think we are just beginning to see the power of Gears. Hopefully it can act as an accelerator to help keep the web open and functionally evolving over the next few years as users demand more from their web applications.

Even though one of my jobs is to promote Google's technologies to the developer community, that is only half my work -- the other half is to advocate for all of the developers outside of Google within Google. I will be internally advocating and fighting for the interests of developers and the web in general inside the halls at Google.

To that end, I want to make some promises to the wider community -- if you see me wavering on these I invite you to challenge me and call me out on them.

I promise to be honest and transparent. I will do my best to give you my real answer -- if I think some Google technology is not appropriate for the task you are trying to solve, I will tell you so and recommend a non-Google technology. I will also strive to be as transparent as I can. I know that Google has a strict secrecy policy, but working within that I will ensure that I remain in communication with developers as much as I can so they are not blindsided.

I promise to not suffer from NIH (Not Invented Here) syndrome and remain humble. While Google has alot of smart people, I believe that there are more smart people outside of Google than inside. NIH is a common problem that companies face -- they can refuse to look at external technologies that were Not Invented Here, promulgating their own instead even when the external ones are superior and winning. I will work hard to make sure I don't fall into that fallacy, and remain humble.

I promise to collaborate. One thing that used to frustrate me when I was outside of Google was the difficulty in collaborating with people inside of Google. Everything was either secret or was thrown over the fence already mostly finished. I promise to work hard not to replicate that -- I want to collaborate and brainstorm with folks across the community and other companies to figure out how to make the web a better place, with everything from structured brainstorming sessions at conferences, to hack days to actually implement some of these ideas. Let's start hacking.

I promise to not simply disappear. I will continue blogging, taking part in open source communities such as Dojo, and showing up at conferences. I won't simply disappear into the Googleplex :) There will probably be a slow down at first as I get aculturated to the new environment, however. I'll continue to hack on Dojo Offline -- hopefully I'll get some time to work on it at Google since it runs on Gears. I will continue to be a member of Douglas Engelbart's community and the HyperScope project, doing jams when we can to work on things like granular addressability and Purple Include -- in fact, I'm excited to see what kinds of stuff I can hack internally at Google to support advanced hypertext.

Any thoughts on all this? Post some comments and let's chat.

Hi folks; I'll be talking today at the Google Developer Day on Dojo Offline + Google Gears integration down in San Jose. I'll be showing a prototype of integration, with some cool exciting functionality that I haven't discussed before. The combined Dojo Offline/Google Gears release will happen in a few weeks. My Google Dev Day presentation is at 4:30 PM, and is part of the Nuts and Bolts session near the end of the day (the GWT team will be there too). Google is helping to fund the Dojo Offline/Google Gears port, and I am consulting with them through SitePen.